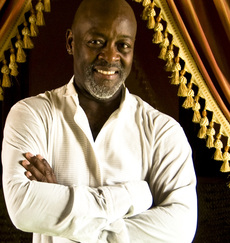 BIOGRAPHY
Not only style but substance is the benchmark of director Otis Sallid’s work. His close attention and keen eye for detail always makes something special out of everything he touches. His accomplishments as a director and choreographer in theater, television and film are known throughout the entertainment industry.

Otis Sallid’s tremendous talent became apparent early in his life while studying dance. His instructors recognized his affinity for dance and encouraged him to audition for the High School of Performing Arts in New York City. His instructors included such mentors as Martha Graham, Jose Limon, Eleo Pomare, Thelma Hill, Louis Johnson, Pearl Primus, Donald McKayle, Anna Sokolow, Lucas Hoving, Mary Hinkson, David Wood, Antony Tudor, Geoffrey Holder, Alvin Ailey and Benjamin Harkavy, a virtual who’s, who in the dance business. A full scholarship to the JUILLIARD SCHOOL followed, where the Conservatory continued to shape his choreographic style and prepared him for his entry into the world of theater, film and television.

After Juilliard, Otis worked his way as an actor-dancer through numerous Broadway shows and dance companies. The experience on Broadway and in acting companies served to expand Sallid’s interest as he realized his dream to write, produce, choreograph and direct.

Otis Sallid’s commercial directing career began with the organization of his own production company.  Within the first year, Otis directed, produced and choreographed more than a dozen national commercials for clients such as FORD, COCA COLA, GENERAL MOTORS, SPRITE, McDONALD’S AND GEORGIA STATE LOTTERY. This garnered him several commercial awards as well as appearing on the reels of such major corporations as PROCTER AND GAMBLE and MCDONALD’S.

After tucking a successful commercial career under his belt, Otis moved on to the world of music videos. Here he was able to mingle his talents as an innovative choreographer and an imaginative director. These efforts won him the M.T.V. and MUSIC VIDEO PRODUCERS ASSOCIATION AWARD.

As a television director Otis has directed several episodes of LIVING SINGLE, FOR YOUR LOVE and the dance sequences for THE NIKKI COX SHOW. His children’s television credits include GULLAH GULLAH for NICKELODEON and OUT OF THE BOX for DISNEY. He has also directed, choreographed and produced the opening titles for SUDDENLY SUSAN, THE JEFF FOXWORTHY SHOW, LIVING SINGLE and the end credits for the film SISTER ACT II. In his spare time he penned the title song for the late night hit musical television show SHOWTIME AT THE APOLLO and SUDDENLY SUSAN.