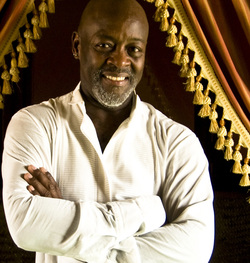 OTIS SALLID - DIRECTOR CHOREOGRAPHER
OTIS SALLID - DIRECTOR CHOREOGRAPHER
Not only style but substance is the benchmark of director Otis Sallid’s work. His close attention and keen eye for detail always makes something special out of everything he touches. His accomplishments as a producer, director, and choreographer in theater, television, and film are known throughout the entertainment industry. His work in Spike Lee’s SCHOOL DAZE, DO THE RIGHT THING and MALCOLM X, the opening titles for the television shows LIVING SINGLE and SUDDENLY SUSAN, Disney’s SISTER ACT II and Thomas Carter’s SWING KIDS has positioned him amongst the most notable producer/director/choreographers.  The latter winning him the BOB FOSSE L.A. CHOREOGRAPHERS DANCE AWARD.

Born and raised in Harlem, New York, Otis Sallid’s tremendous talent became apparent early in his life while studying dance with the Harlem Youth Unlimited. Instructors ALVIN AILEY, LOUIS JOHNSON, PEARL PRIMUS, GEOFFREY HOLDER and THELMA HILL recognized his affinity for dance and encouraged him to audition for the High School of Performing Arts. He was awarded a four-year scholarship. A full scholarship to the JUILLIARD SCHOOL followed where ANTONY TUDOR, BENJAMIN HARKAVY, MARY HINKSON, MARTHA GRAHAM, and JOSE LIMON continued to shape his career.

While at the Juilliard School Otis spent nights studying acting and directing at the NEIGHBORHOOD PLAYHOUSE and soon thereafter became a member of the distinguished NEGRO ENSEMBLE COMPANY working with such distinguished actors as Denzel Washington, Adolph Caesar, Antonio Fargas, and Roscoe Lee Brown.

As an actor and dancer Otis worked his way through numerous Broadway shows including THE WIZ, PURLIE, HALLELUJAH BABY!, TWO GENTLEMEN OF VERONA,  DON'T BOTHER ME I CAN'T COPE and ME AND BESSIE where he played Linda Hopkins leading man. The experience on Broadway and in acting companies served to expand Sallid’s interest as he realized his dream to write, produce, choreograph and direct.

While working in the Broadway show The Wiz he formed his theater company The New Art Ensemble. In his first season, Otis was able to produce the company on Broadway at the Edison Theater. The reviews were tremendous. Debbie Allen after working with Otis in his company invited him to assist her in the hit television series FAME. Under her tutelage, he soon learned to direct and choreograph for film. The following year he choreographed five episodes of the series.

Otis Sallid’s commercial directing career began with his own production company Creative Otis Inc. Within the first year, the company produced and directed more than a dozen national commercials for clients such as FORD, COCA-COLA, McDonald's, SPRITE, GEORGIA STATE LOTTERY, AND GENERAL MOTORS. This garnered him several commercial awards as well as appearing on the reels of several Fortune 500 corporations.  After tucking a successful commercial career under his belt Otis moved onto the world of music videos. Here he was able to mingle his talents as an innovative choreographer and an imaginative director. These efforts won him the MTV and the MUSIC VIDEO PRODUCERS AWARD. In 1995 Sallid conceived the hit Broadway show SMOKEY JOE’S CAFÉ and in 1996 he choreographed the 69th ANNUAL ACADEMY AWARDS.

As a television director Otis has directed several episodes of LIVING SINGLE, FOR YOUR LOVE, A DIFFERENT WORLD and the dance sequences for THE NIKKI COX SHOW. His children’s television credits include OUT OF THE BOX for the Disney channel and GULLAH GULLAH for Nickelodeon. He has also produced and directed the opening sequences for SUDDENLY SUSAN, THE JEFF FOXWORTHY SHOW, LIVING SINGLE and the end credits for the feature film SISTER ACT II.

When he is not running his production company Creative Otis Inc. Otis spends his time speaking and teaching in colleges, universities and arts programs around the world, The Boston Conservatory, Berklee School of Music, Pace University in New York City, The Broadway Dreams Foundation and Perry Mansfield in Steamboat Springs in Colorado just to name a few.

Most recently Otis produced a segment of Anna Deveare Smith’s HBO film, Notes From The Field. He is also co-starring in the new television series Step Up premiering on the new network YouTube Red.